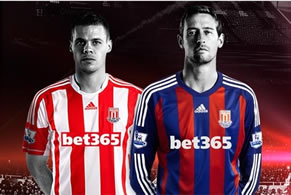 bet365 has extended their close relationship with Stoke City Football Club by agreeing to a 7 figure shirt sponsorship deal.

Reported yesterday by ThisIsStaffordShire.co.uk, bet365 will now become the official Stoke City shirt sponsors after agreeing a “substantial seven-figure deal”. Current shirt sponsor, Britannia Building Society, has decided to end their £4 million deal after sponsoring them for 15 years. They will however continue to have the stadium name rights until 2016.

bet365 is run by the Coates family who are also majority shareholders of Stoke City Football Club. The deal will the bet365 logo on the football shirts for the next 3 seasons (starting from the 2012-2013 season onwards). Speaking of the agreement, Denise Coates, who is the daughter of Stoke City chairman Peter Coates and is joint Chief Executive of bet365, said:

“We are delighted to have reached an agreement to become Stoke City’s shirt sponsors. It is a perfect fit for us as a Stoke-on-Trent-based company with a global reach and international markets. It also further demonstrates our long-term commitment to the club.”

Tony Scholes, who is the Stoke City Chief Executive, said “the club is already hugely indebted to the support from bet365 and its owners, the Coates family. While Britannia and the Co-operative Group focus more on local and national markets, bet365, who are the largest private sector employers in the area, operate on a global basis. This agreement with bet365 means we have been able to maximise the international element of the club’s exposure. We received a number of offers from potential sponsors, but bet365 were the highest bidders.”

bet365 are a very big online gaming company with more than 6 million customers. As a result of their shirt sponsorship deal with Stoke City, they would benefit from the global TV exposure the Premier League club will give them.

We highly recommend their Casino which is powered by Playtech. You can play over 150 casino games including brilliant slots such as Fantastic Four, The Incredible Hulk, Gladiator and The Mummy. You can get a 150% welcome bonus up to £150 using the offer code BONUS100 meaning that if you deposit £100, you will get £150 free.