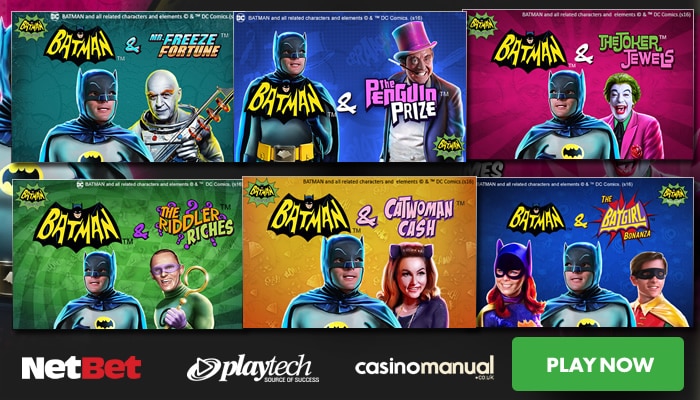 NetBet Vegas has added all 6 Batman themed video slots from Playtech – read about them all and how to get an exclusive welcome offer.

Playtech has launched a series of Batman themed games recently with 6 titles to enjoy – they are all based on the classic 1960s television series with the slots featuring clips and footage from the original TV series. They are all part of the DC Super Heroes Jackpot network meaning there are 4 progressive jackpots to be won. Here’s a summary of what you can expect:

Batman and The Joker Jewels

Batman and The Joker Jewels has 5 reels and 25 paylines and has The Joker Random Wilds feature where up to 9 wilds can be added to a spin at random. There’s also a Batman vs The Joker Free Games feature where you get unlimited free spins with a multiplier up to 5x. Reach the end of the Bat-Tastic Multiplier Meter and the free spins stop.

Batman and Catwoman Cash also has 5 reels and 25 paylines and has a Cat Burglar Bonus feature where cash bonuses or increased multipliers are on offer. The multipliers are for the Batman vs Catwoman Free Games feature where there’s up to 25 free spins to be won. There are super stacked symbols during the feature with cash prizes and a 2x multiplier for the subsequent 24 base game spins.

Batman and The Batgirl Bonanza

Batman and The Batgirl Bonanza has 5 reels and 60 paylines with 2 reels with 2 symbols to the left and 3 reels with 4 symbols to the right. Look out for 5 respins with the 2 left-side reels locked in the Batgirl Locked Respins feature as well as the Batman Team-Up Free Games feature where you match the heroes to win up to 25 free spins. The 2 left-side reels form 1 reel with 2×2 Super Symbols bolstering your win potential.

Batman and The Riddler Riches

Batman and The Riddler Riches has 5 reels and 243 ways to win and benefits from Collapsing Reels where you can win time and time again from each spin. There’s a Mystery Reels feature where mystery symbols are changed into the same symbol for bigger wins. The Batman vs The Riddler Bonus Wheel gives you access to 3 features with sticky wilds on Collapsing wave wins, cash prizes with multipliers and multipliers up to 5x on Collapsing wave wins.

Batman and Mr Freeze Fortune begins with 5 reels and 1,024 ways to win and has 4 randomly triggered features in the base game giving you symbol transformations, up to 10x win multipliers, multiplier wilds and res-spins with locked wilds. You also have the Batman vs Mr Freeze Free Games feature where you can win up to 15 free spins with multiplier wilds. There’s also a whopping 2,400 ways to win here.

Batman and The Penguin Prize

To play all 6 new Batman video slots, sign up to NetBet Vegas where you are welcomed with 20 no deposit free spins on Age of the Gods – enter the code SLOTGOD in the Cashier before you deposit. When you do deposit, you are rewarded with a 100% match bonus up to £500.