Novomatic has today released Almighty Reels – Realm of Poseidon which focuses on the Greek God of the Sea and benefits from Giant Symbols.

Almighty Reels – Realm of Poseidon has a Greek mythology theme and comes with 5 reels and 25 paylines. Playable from just 25p per spin on desktop, mobile and tablet devices such as iPhones and iPads, the game takes you to the lost city of Atlantis where the reels are set against a golden ancient temple.

Graphically superb, Almighty Reels – Realm of Poseidon benefits from symbols that can appear stacked in 3×3 size for bigger wins. There’s a Giant Symbol on every spin. Now, the game is all about the Free Games feature where you get 10 free spins.

1 symbol is randomly selected to become the Giant Symbol – only this symbol appears during the feature meaning it will takes over the 3 middle reels on every free spin. Just hope for the high value symbols for enhanced winning potential.

With 500 times your bet to be won on each spin, make sure you read the full Almighty Reels – Realm of Poseidon video slot review. To see the game in action, watch the official YouTube trailer below:

You can play Almighty Reels – Realm of Poseidon at Mr Smith Casino – they’ve added plenty of new video slots lately including betdigital’s Knights of Gold, IGT’s Electric Tiger and NetEnt’s Jumanji. You also have the superb Book of Ra Magic from Novomatic.

With over 1,000 video slots to choose from, this UK dedicated online casino welcomes new players with a 100% first deposit bonus up to £100 as well as 20 Starburst bonus spins. They also have plenty of promotions whereby you can get bonus spins and £1 big spins every time England play as well as the chance to win £650,000 in cash on top of your jackpot if you play Mega Fortune! 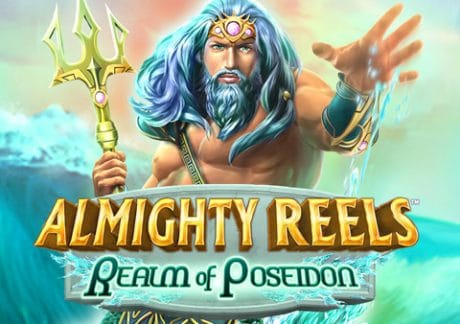