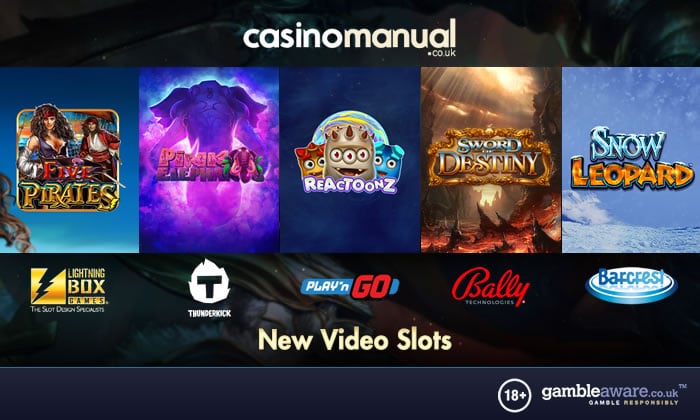 It’s shaping up to be a very busy few days in the online casino world with 5 new titles hitting the virtual shelves this week. On offer are Reactoonz, Snow Leopard, Sword of Destiny, Pink Elephants and Five Pirates.

Sci-fi adventure is on the cards in Reactoonz, a cascading reels game from Play ’N Go. This highly volatile sequel to the popular Energoonz game comes with 4 modifier extras that award extra wilds or transformed, mirrored or exploding symbols. Look out for the special Gargantoon which can add colossal 3×3 wilds into play as well as double payouts. If you like high variance action this will be one for you.

Epic, Dungeons and Dragons-style adventure is on offer in the second new arrival, Sword of Destiny. This 25 payline game is from the Bally stable and also comes with an assortment of base game modifiers that award extra wilds and symbol upgrades on an expanded 50 payline machine. There’s also a free spins round with expanding multipliers and a cash trail that delivers ever expanding jackpot prizes.

A barren winter wonderland is the backdrop to the action in Barcrest’s Snow Leopard. This 6 reel game comes with at least 1 wild reel on every spin. The bonus round offers free spins with expanding multipliers of up to 10x. Play in Big Bet mode to open up a second set of reels as well as synced symbol spins, high value symbol spins and multipliers.

The 6 reel, 4,096 ways to win game engine might be a little unusual but Thunderkick’s usual high-end visuals are present and correct in Pink Elephants. This video slot safari comes with a classic free spins round. Fill meters to transform the lower value symbols into the highest paying pink elephant symbol. With its high spec design, re-triggerable free spins and RTP of 97% this is a very playable game.

Rounding out the new arrivals is Five Pirates, a buccaneering 5 reel, 1,024 ways to win video slot from Lightning Box Games. Featuring all the classic design you’d expect from a pirate themed title, there’s some very solid feature action on offer here too.

The latest releases offer plenty of action and a wide variety of themes. They’re all available on general release now.