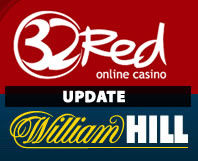 32Red Casino announced back in January 2011 that the High Court of Justice of England and Wales ruled in their favour against William Hill for using 32 Vegas and 32 V because the infringed on 32Red’s registered trademarks. William Hill since appealed and it has been dismissed.

This follows a 6 day trial that took place in the High Court in October 2010. They ruled that 32 vegas did infringe on 2 of 32Red’s European Community trademarks. William Hill argued that 32Red’s trademarks should be “invalidated”. As a result, the judge ordered that 32Red “be granted in injunction against William Hill and ordered an inquiry to assess monetary damages”.

The Court of Appeal described William Hill’s appeal as a “full scale, wide-ranging attach on the Judge’s analysis and conclusions on virtually every aspect of his judgement”. As a result, the appeal was dismissed. This took place on the 5th an 6th of December 2011.

32Red have also been awarded £70,000 which is to be paid to them within 14 days – this represents the costs associated with the Appeal coupled with interest. The amount William Hill have to pay 32Red for damages and liability for costs associated for the original hearing will be assessed by the High Court in early 2013.

Speaking on the appeal dismissal, Ed Ware (who is the 32Red CEO) said:

“We are delighted that the Court of Appeal has categorically dismissed William Hill’s appeal. The success of our cross-appeal is also very satisfying. Quite correctly, the Court of Appeal’s judgment also supported the view that taking advantage of a well known brand such as 32Red is not acceptable.

This judgment further underlines our Intellectual Property Rights and should deter other operators from infringing our trade marks. We are now focused on concluding this matter with William Hill and have already begun preparations for the inquiry into damages”.