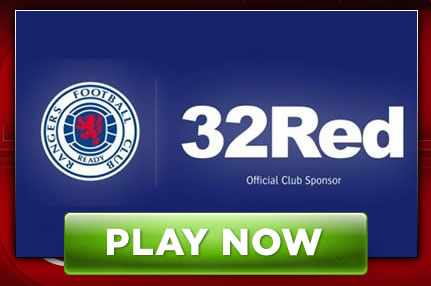 32Red Casino has agreed a sponsorship agreement with Rangers Football Club commencing from next season (2014-2015) – find out more below.

32Red PLC has announced they have agreed a three year sponsorship with Rangers Football Club – the deal commences from the beginning of the 2014 -2015 season and runs until the end of the 2017-2018 season. The agreement sees 32Red having shirt sponsorship, extensive visibility at Ibrox (their football stadium) and obviously online on Rangers’ websites and digital platforms.

32Red will have access to Scotland’s largest football fan base which is a big plus – they have just gained promotion from League One and will be playing in Scotland’s Championship next season – I’m sure Rangers will be back in the Scottish Premiership soon after making the deal for 32Red a good one.

Speaking of the sponsorship agreement, Ed Ware (who is the CEO of 32Red) commented: “We are delighted to be working with Rangers Football Club and look forward to being part of the continued rise and return of the Club. 32Red has a history of successful football club sponsorship deals and we look forward to the next three seasons and our new and proud association with a club with such heritage and potential.”

Graham Wallace (who is Rangers Chief Executive) also commented by saying: “We are delighted to announce today a three-year shirt sponsorship deal with 32Red, the UK’s premier online casino company. We look forward to working closely with them over the next three seasons in a partnership that we believe will be hugely beneficial to both parties.”

32Red Casino is a hugely respected online casino that has many, many accolades and awards for their second to none customer service. They offer their customers both a download and instant play casino powered by Microgaming. They have over 500 casino games to choose from including blackjack, roulette and video slots. Slots are where they excel with titles such as Immortal Romance, Thunderstruck II, Avalon II, Tomb Raider Secret of the Sword and The Dark Knight Rises amongst many others.

They currently offer UK players a £10 no deposit bonus which means you can get £10 free – just register an account and enter a valid debit/credit card (this is to validate you’re over 18 basically) and you’re £10 free will be added instantly. Furthermore, you will get £32 free for every £10 you deposit up to £160 meaning you can get £160 free when you deposit just £50.